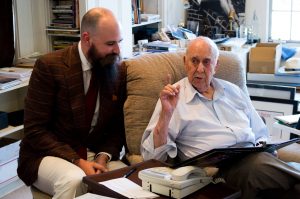 We lost an incredible comic legend this summer: Carl Reiner. He died at his home in Beverly Hills, CA, on June 29th. He was 98.

Carl’s career in comedy spanned seven decades. He got his start during World War II.

Carl did it all – he went on to perform on stage, radio, TV and movies.

He was on TV at a time when TV was just television: this weird new thing that nobody was totally sure what to do with, or what it’d become.

Alongside Sid Caesar, he performed on the pioneering Your Show of Shows. Carl created the Dick Van Dyke Show, one of the greatest TV shows of all time. He co-wrote and directed Steve Martin’s The Jerk.

He kept working right up until the end, too – one of our favorite recent things he did was in Parks and Recreation. He played Ned Jones, the president of Pawnee Seniors United.

Mel Brooks was his collaborator and best friend. The two of them would hang out together pretty much every day.

We’re taking a moment to remember Carl Reiner. Carl was also a prolific writer with more than two dozen book titles to his name. When we spoke in 2017 he had recently released a memoir, Too Busy to Die. He was nice enough to invite us to his home for the interview to talk about his time in the army, his relationship with Mel Brooks and his legacy.

Liked Remembering Carl Reiner? Listen to these next...