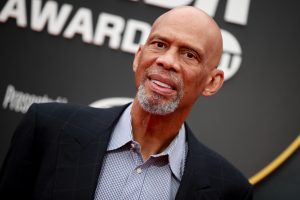 Kareem Abdul-Jabbar on his new documentary, his legendary basketball career and more

Kareem Abdul-Jabbar is one of the greatest basketball players of all time. A NBA Hall of Famer, six-time MVP, nineteen-time All-Star, and of course, the master of the skyhook shot.

He grew up in New York City and was destined for basketball greatness. By the time he was in the eighth grade, he was pushing seven feet tall and could already dunk a basketball. During his high school career, he scored a record number of points and led his team to three straight championships.

He went on to play college ball at UCLA, and in 1969 he was drafted first overall to the Milwaukee Bucks. He played with them for six seasons and in 1975 he was traded to the Los Angeles Lakers. He was a key part of the legendary Showtime era Lakers alongside Magic Johnson. He spent fourteen seasons in LA and retired from basketball in 1989 at the age of forty-two.

Since retiring, Abdul-Jabbar has shown he has talent and skill far outside the paint. He’s written books, columns, and even worked as a writer for Veronica Mars. He’s acted on screen opposite Bruce Lee and Leslie Nielsen. He’s also an outspoken advocate for social justice.

Most recently, Kareem Abdul-Jabbar has been lending his voice on the documentary front. Last year, he narrated a film on the History Channel called Black Patriots: Heroes of the Revolution, which earned him an Emmy nomination. This year he’s back with another History Channel documentary called Fight the Power: The Movements That Changed America. The film dives into the history of different movements, protests, and leaders that have reshaped America.

We talk with the NBA legend about this new documentary, playing alongside Magic Johnson, and his roller disco days. Plus, he’ll also share why he was never able to play a game of Double Dutch as a kid.

Liked NBA Hall of Famer: Kareem Abdul-Jabbar? Listen to these next...