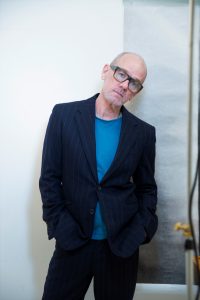 Michael Stipe on his new music, photography and more

This week we’re talking with Michael Stipe, who fronted the band R.E.M., about discovering his voice and the punk rock that inspired him to become a singer in high school.

Raised a military brat, Stipe was frequently relocated as a kid, from Germany to Texas and Alabama. His family settled in Southern Illinois as he entered high school, where he developed a love for punk rock. After a brief stint at the University of Georgia, he met Peter Buck and started the beginnings of what would become R.E.M., one of the most acclaimed bands in rock history. Over 30+ years, they sold over 85 million albums and Stipe was inducted into the Rock and Roll Hall of Fame.

Outside of R.E.M, which broke up in 2011, he’s collaborated with Warren Zevon, Patti Smith, Billy Bragg, KRS-One, Tori Amos and so many others. Stipe has also been working on photography, collaborating with artists like Aaron Dessner and Justin Vernon.

Recently, he’s begun recording his own material again. Slowly and deliberately, when inspiration strikes. His latest single is called “Drive to The Ocean.”

Liked Michael Stipe? Listen to these next...