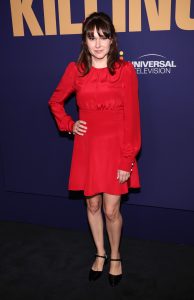 Claudia O’Doherty on Killing it, getting into comedy and more

Claudia O’Doherty is, as you are about to hear, an extremely funny person. She is from Sydney, Australia. Some of her work includes serving as a writer on Inside Amy Schumer and a regular part on Netflix’s Love.

Claudia has her own brand of comedy that I guess one could describe as “cheerfully deranged.” Sort of a kindler, gentler Adult Swim bizarreness. She has done things like had stand-up sets sponsored by the National Chair Association, recorded videos from her home while on house arrest and more.

Claudia’s latest project is called Killing It. It’s a sitcom streaming on Peacock summed pretty neatly in the tag line: “Class, capitalism and one man’s quest to achieve the American dream.”

The one man is Craig, played by Craig Robinson. He’s an out of work security guard with a nearly sure fire plan for business success. All he needs is capital.

Claudia stars as Jillian in the series. She’s a deranged, snake obsessed app-based car driver. Craig meets Jillian when he hails her for a ride after experiencing some car troubles.

Claudia O’Doherty joins Bullseye to talk about her work on Killing It. She also talks with us about how she got into comedy and the Australian comedy scene. Plus, she reveals to us what the Australian term for “slide” is – like the playground toy you slide down.

Liked Claudia O’Doherty? Listen to these next...