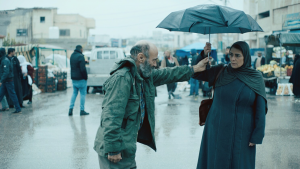 Hiam Abbass was born and raised in and around Nazareth, a predominantly Arab part of Israel. These days she mostly lives in Paris.

Hiam’s an actor. She has nearly 100 credits to her name: artsy indie movies, French TV dramas, Moroccan horror flicks; she’s appeared on Hulu’s Ramy and in the movies Munich and Blade Runner 2049.

But if you know Hiam Abbass from one thing, it’s probably Succession, the massive hit TV show on HBO. Hiam plays Marcia, Logan Roy’s wife. On a show famous for its craven, manipulative, sometimes frightening characters, Marcia dominates the lineup in all three categories.

Most recently, though, Hiam’s performed in a new movie – it’s called Gaza, Mon Amour. It’s Palestine’s submission to this year’s Academy Awards. It’s pretty much everything Succession isn’t: it’s a romcom. It’s slow-paced. It’s sweet in parts, sad and scary in others.

In it, Abbass plays Siham, a widowed tailor living with her adult daughter. She meets Issa, a local fisherman who never married. A courtship begins, in fits and starts: missed connections, awkward conversations, brief, affectionate glances. And, like the title suggests: it’s set in Gaza, a Palestian city beset by conflict. It’s a really unique film.

We’ll ask Hiam about growing up in Nazareth, how she got the role to play Marcia on Succession, and whether or not she thinks Marcia loves her husband, Logan Roy. Succession intrigue! Don’t miss it!

Liked Hiam Abbass on Gaza mon Amour, Succession and more? Listen to these next...