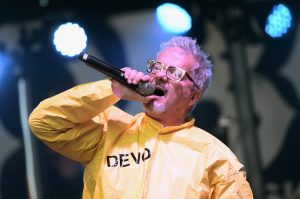 Mark Mothersbaugh doesn’t need much of an introduction.

And, of course, he’s also the co-founder and frontman of Devo, the beloved new wave/post-punk band. The band got its start in Akron, Ohio, in the early 1970s, and had hits like 1980’s Whip It.

And, guess what: Devo is back, baby! They’re touring the US with a handful of dates, still as fun as ever. So we figured we’d reach out to Mothersbaugh for a segment we call The Craziest Day of my Entire Career. And boy oh boy, did he deliver! This story has it all: celebrities, disco, wild miscommunication, Andy Warhol. You should also know that there’s some drug use and descriptions of violence in this segment.

Liked Mark Mothersbaugh: The Craziest Day of My Entire Career? Listen to these next...