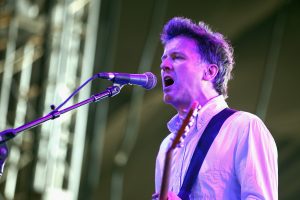 Superchunk was abrasive and vulnerable. Guitars dominated their sound, with Mac’s voice sitting low in the mix. The band caught on and became huge. So big, they helped coin the Gen X term “Slacker” with their 1990 hit “Slack Motherf–ker.”

To release Superchunk’s albums, Mac and his bandmates started their own label: Merge Records. Merge quickly became more than just a run-of-the-mill indie label. Over its 30+ years of existence, Merge released albums like Neutral Milk Hotel’s In The Aeroplane Over The Sea, Spoon’s Kill The Moonlight and Funeral, the breakthrough debut by Arcade Fire.

Mac is also a solo artist. He’s released a handful of albums and EPs under his own name, in a broad range of genres. He’s made everything from folk rock to ambient music.

His latest record is called The Sound of Yourself. It’s a fun pop record that caught the ear of our friend Jordan Morris. Along with doing Bullseye interviews, Jordan’s also a comedy writer and the co-host of another Maximum Fun podcast, Jordan, Jesse, Go!. They talk about recording an album during lockdown, using samples in songwriting, and what makes a good sax solo on a pop record.

Liked Mac McCaughan of Superchunk? Listen to these next...