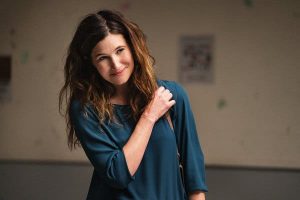 Join us as we dig in the archives and revisit our conversation with Kathryn Hahn. You’ve seen her in comedy films like Step Brothers, the Anchorman and many others. On TV she starred in the NBC series Crossing Jordan. She was also on Parks and Recreation – she played Jennifer Barkley, the political consultant.

These days you can catch her on HBO’s Mrs. Fletcher. Hahn stars as the title character – a middle-aged divorcee whose life changes dramatically after her only son starts college as a freshman. It’s a sad, touching and sometimes very funny story about sexuality, parenthood and mid-life crises.

When she joined us a couple years ago she had been working quite a bit with the writer and director Jill Soloway. Hahn starred in Soloway’s 2013 film Afternoon Delight, and she plays Raquel the rabbi on Amazon’s Transparent. Hahn was also starring in another Amazon series called I Love Dick, based on the Chris Klaus book by the same name.

Hahn and Jesse talk about the inherently feminist space that I Love Dick inhabits, and the deeply complex character that Kathryn plays on the show. She talks about working with Jill Soloway, and the special and deeply creative environment that Soloway creates on set.

This interview originally aired in June of 2017. The television writer, Jill Soloway uses they/them pronouns. When we recorded this interview they were still using she/her.

Liked Kathryn Hahn? Listen to these next...