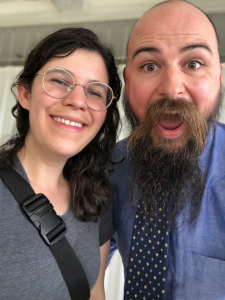 Rebecca Sugar is an animator, writer and songwriter. She was a writer and storyboard artists on the hit animated show Adventure Time before moving on in 2013 to create her own animated series: the wildly popular Steven Universe. She’s earned six Prime-time Emmy Award nominations and is the first non-binary woman to independently create a series for Cartoon Network.

The show is really, really special.

It’s about a boy named Steven who is navigating preteenhood at the start of the series. He lives in a seaside town with his father Greg. Pretty early on, Steven realizes there’s something special about him. Turns out, he’s half human, half Gem. Gems are these beings from another planet that possess superpowers. Most of them want to destroy Earth. But three of them want to save it.

Together, Steven along with Gem fusion Garnet, Earth-born Amethyst and the nurturing but neurotic Pearl, fight to save the planet.

But the show is about more than a fight for earth’s future. It’s about more than just Steven, too. It explores the town he’s growing up in, profiles the family who own the local pizzeria, follows a child named Onion who is… an onion.

It’s a show that deals with complicated emotions. Jealousy, shame, regret. Characters help each other work through past traumas and sometimes they literally come together through fusion to help each other heal.

Like we said, it’s a really, really special show.

This past September saw the release of the Steven Universe movie and an accompanying soundtrack – many of the songs written and composed by Rebecca. Cartoon Network also just kicked off a special epilogue series for the show called Steven Universe Future. It’s
airing now.

Rebecca sat down with Bullseye to talk about the inspiration behind the show, creating femme characters who aren’t necessarily nurturers and dealing with fan feedback. Plus, Jesse and Rebecca discuss some of their favorite cartoons growing up.

Pick up the soundtrack to the Steven Universe movie with appearances by Estelle, Patti Lupone and more!

Liked Rebecca Sugar? Listen to these next...