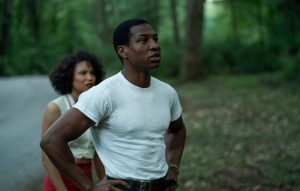 Jonathan Majors has been acting professionally for just under five years now. He’s done theater, television, and starred in movies. In that short amount of time, he’s become one of the most captivating performers in Hollywood.

On screen, he’s charismatic and charming when the role calls for it  – and he can turn to vulnerable and broken almost instantly. He’s the kind of actor that just helps take the story to the next level – he has a sort of magnetic quality.

Watching him, you can easily lose yourself and forget about other performers.

He starred in two of our recent favorites: Spike Lee’s Da 5 Bloods and Joe Talbot’s The Last Black Man In San Francisco.

Not long ago, Jonathan earned an Emmy nomination for his work on HBO’s Lovecraft Country.

The show is based on a book by Matt Ruff. The book and the TV series pull from some of H.P. Lovecraft’s most iconic tropes – dark mansions with hidden secrets, huge monsters covered with eyeballs.

But it also reckons with Lovecraft’s work. H.P. Lovecraft has often been seen as one of the most influential writers of the 20th century, but he also wrote essays, stories and poems that were unapologetically racist.

Jonathan Majors portrays Atticus in the show. A young black man traveling across the US in the 1950’s to find his missing father. Atticus embarks on the supernatural journey alongside his friend Letitia and his uncle George.

There are plenty of moments where Atticus and the rest of the protagonists fight to escape literal monsters. But the characters also face very real threats from other people: racist police, burning crosses, lynchings.

Jonathan Majors joins us to talk about Lovecraft Country. Plus, he’ll dive into acting theory and craft – and he gets into it, really into it.

Liked Jonathan Majors? Listen to these next...