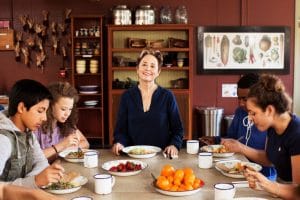 50 years ago, in Berkeley, Calif., a restaurant called Chez Panisse opened its doors.

It wasn’t super buzzy at the time. The chef, Alice Waters, hadn’t opened a restaurant before. The night they opened, they had a lot of friends helping out, but were short on silverware. They served a four-course menu that cost just under $4.

Chez Panisse became known as one of the finest restaurants in the country, if not the world. It’s hosted the Dalai Lama and it’s held a Michelin star.

What made the place important, though, and why we’re talking about it now, is that Chez Panisse was one of the first restaurants to champion local, seasonal, sustainable food. It’s something you see on menus all the time today, but back in 1971… Well, you didn’t. It’s just not how people thought about food.

Again and again, if you read up on the history of today’s sustainable food movement, Alice Waters’ name comes up.

Alice is also a devoted, sometimes uncompromising advocate for changing the way we eat. She cares deeply about how we grow food, what our kids eat at school and, maybe most importantly, teaching them how food is made.

In 1995, she founded the Edible Schoolyard Project at a middle school in Berkeley, which has students growing fresh produce at school as part of the curriculum.

To celebrate the 50th anniversary of Chez Panisse’s opening, we’re replaying our interview with Waters from 2019.

Liked Alice Waters, chef and activist? Listen to these next...