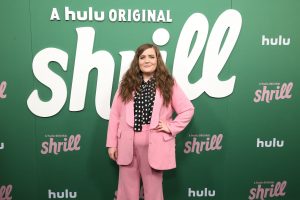 Odds are, you probably know Aidy Bryant from Saturday Night Live. She’s been on the cast now for almost a decade. On the show she’s done killer impressions of Ted Cruz, Sarah Huckabee Sanders, and sang on an SNL holiday classic called “(Do it On My) Twin Bed”

For the last few years, Bryant has also starred in and written for her own show: Shrill. The show’s based on the memoir of the same name by Lindy West. It just wrapped up its third and final season on Hulu, and it has earned Bryant an Emmy nomination for best lead actress in a comedy series.

Bryant plays Annie Easton in the show. She’s a writer living in Portland struggling to find her voice. She’s got an on and off boyfriend who, frankly, should probably be just all the way off.

Annie is also fat. She says it herself in the show’s pilot. Unlike, you know, pretty much every other TV show, Annie’s body isn’t treated like a problem to overcome. It doesn’t really define the show, either. Instead, weight, and body image come up on the show the way these things show up in real life. She is faced with insensitive comments from well-meaning family members, insults from strangers, and moments of crushing self-doubt.

Though the world tries to paint this image of Annie not being good enough because of her weight, she realizes that she is just as good as anyone else and that she can change her life without having to change her body.

Aidy Bryant joins guest host Tre’vell Anderson of FANTI to chat about Shrill and her personal connection to her character in the show. She also shares the fun way she found out about her Emmy nominations. Plus, she looks back on some of her favorite moments from both Shrill and Saturday Night Live.

Liked Aidy Bryant? Listen to these next...