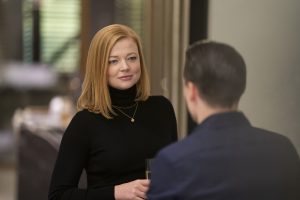 Odds are, you know Sarah Snook for her role on Succession, the latest Zeitgeisty TV drama on HBO. Sarah plays Siobhan Roy. But to her friends and family, it’s just “Shiv.”

Shiv. Like the sharp thing you’d use to maim some unfortunate soul who got in your way.

Succession follows the Roy family. They own a giant conservative media conglomerate called Waystar Royco. The family’s patriarch, Logan Roy, is aging and can’t run the company forever. Who will he name to take over? And what are they willing to do for it? Or will he just blow the whole thing to pieces out of spite?

Shiv is Logan Roy’s only daughter. The part ended up earning her a bunch of critical praise and awards nominations, including an Emmy and, more recently, a Golden Globe.

Like pretty much every character on Succession, Shiv is complicated. She’s cunning and fragile, selfish and vulnerable. Principled… but not too principled. Sometimes she sits above the fray, letting her brothers squabble over the family business. Other times, she’s right in the middle of the fight.

Linda Holmes, the terrific host of NPR’s Pop Culture Happy Hour, talked with Sarah in 2020 about what it’s like to play one of the most fascinating, complex and confounding characters on television today.

Liked Sarah Snook? Listen to these next...