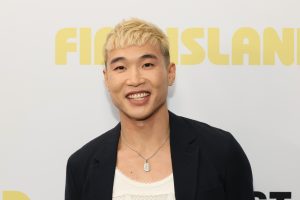 Fire Island, the romantic comedy he wrote and stars in, debuted last month on Hulu. It’s a modern retelling of Pride and Prejudice, and the first major studio romantic comedy to center gay Asian American leads.

His latest stand-up special Psychosexual is currently streaming on Netflix. In it, Joel discusses his fascination with human sexuality, the nuances of being gay and Asian and eating at P.F. Chang’s.

He’s also starring on the new Apple TV+ workplace comedy Loot. The premise is one we’ve seen a lot in recent headlines: a tech billionaire cheats on his wife after 20+ years, and the wife bounces back by publicly becoming a charity figurehead. Joel plays Nicholas, the faithful assistant to Maya Rudolph’s billionaire divorcee character Molly Novak.

Joel’s recent successes come as no surprise to anyone who has watched his career flourish. His 2018 debut stand-up album Model Minority is subversive and compelling. He takes the stage with a very distinct stage presence: goofy, confident, even kind of preposterously so sometimes.

He’s written for well-received shows like Big Mouth, Billy On The Street, and The Other Two. Naturally, his progression into acting has been met with similar rave reviews.

Joel talks with Bullseye about his religious Illinois upbringing, the parts of his career he’s most proud of and why he loves chain restaurants. Revisit this episode as Joel Kim Booster gets real with Jesse Thorn.

This interview originally aired in September of 2018.

Liked Joel Kim Booster? Listen to these next...