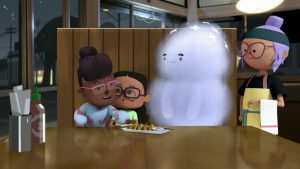 The Netflix series City of Ghost is a little tricky to explain.

For starters, it is an animated children’s show. The characters are three dimensional, mostly children that could be described as more thoughtfully designed Wii avatars. The series is set in Los Angeles, and the backgrounds are real places that thousands of people walk through every day.

The premise of the show is pretty simple. It is framed like a documentary, and your hosts are a group of kids who are all members of the Ghost Club. The Ghost Club, as the name implies, gets reports of ghosts in the city, goes to find them and, once they do, sits down to interview them.

City of Ghosts takes the sometimes scary and alienating real world we live in, and combines with a plot device that can be even more scary: ghosts.

With that being the case, City of Ghosts is not scary or alienating. In fact, it is the opposite. The show is warm, inviting and illuminating. It gives the viewer – both kids and adults – a better idea of the world around us without sacrificing our capacity for imagination.

It is a really hard thing to do, but Elizabeth Ito, the show’s creator, managed to pull it off. Elizabeth is a writer and animator who has worked on Adventure Time, SpongeBob SquarePants and more. City of Ghosts just nabbed a Peabody award for its brilliant first season. To celebrate, we are revisiting our conversation with Elizabeth from last year.

Elizabeth’s latest project is a new animated short film called Mall Stories. There will be a free screening of the film on Thursday, July 7th at the Burbank Town Center in Burbank, California.

Elizabeth joins Bullseye to talk about making children’s TV that adults can enjoy, capturing the feeling of her hometown of Los Angeles and the time she saw a ghost.

This interview originally aired in June of 2021.

Liked Elizabeth Ito, creator of City of Ghosts? Listen to these next...