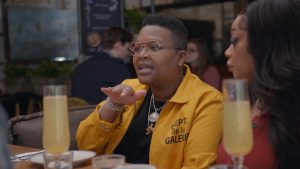 Content warning: There is some references to sexual assault in this conversation. No graphic descriptions, just a few mentions of it. This interview also contains some explicit language and graphic, frank talk about sex that some listeners might be sensitive to.

Comedian Sam Jay was born in Atlanta, but she was raised in the Dorchester area of Boston, Massachusetts. As a young adult she moved back to her birthplace, and went to school in Atlanta. Sam lived there for about eight years before she went back to Boston.

At 29, Sam was working in a mailroom in Boston unsatisfied with where her life was headed. It was there she decided to give stand-up comedy a try. Shortly after, she moved back to Atlanta yet again. This time Sam found her voice and grew her skills as a comedian.

In the decade since Sam embarked on her comedy career she’s starred in two comedy specials, was a writer on Saturday Night Live and co-created the sitcom Bust-Down on Peacock.

Each episode usually starts at Sam’s apartment (Or, at least, a set that looks like Sam’s apartment). She’s hosting a party, hanging out with her pals. Often over drinks, they discuss a tough topic. Usually something that’s close to home for Sam: queerness, intersectionality, prison, fidelity.

Those casual conversations are interspersed with an interview. Usually something a bit more serious, and there’s often a sketch thrown in.

Sam Jay talks about her groundbreaking show PAUSE, what it was like to start comedy a little later in life, how that affected her trajectory as a comedian and so much more.

Liked Sam Jay? Listen to these next...