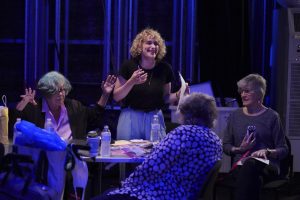 Jo Firestone is a working standup comic, writer and actor. She wrote on The Tonight Show for a few years, had some great parts on Joe Pera Talks With You and Shrill.

Last year, she found herself with some free time on her hands. So she started teaching a class on how to do standup comedy. Her students, about 16 of them, were members of the Greenwich House Senior Center in New York City. Their average age was around 70.

Then, the pandemic happened. But rather than shut down the class, they moved to video chat. Every Monday morning they explored what it meant to be funny.

Like many comedy classes, it all ended in a recital. Jo Firestone’s new comedy special Good Timing, shows the comedy Jo’s students came up with. It also features interviews between Jo and the students with behind the scenes footage from the classes.

Jo Firestone joins us on the latest episode of Bullseye to talk about the new special, and what she learned when teaching comedy to senior citizens. She also talks about researching her role as a doomsday prepper on one of our favorite TV shows: Joe Pera Talks With You.

Good Timing with Jo Firestone is streaming now on Peacock. The latest season of Joe Pera Talks with You is out Sunday, November 7. You can also check out Jo as the co-host of the Maximum Fun podcast Dr. Gameshow.

Liked Jo Firestone on ‘Good Timing’? Listen to these next...