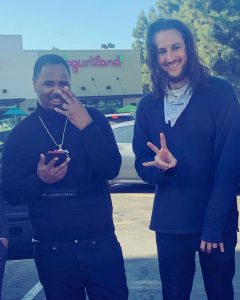 It happened backstage at a festival in Los Angeles, his hometown. A group of 40 or so people ambushed Drakeo. One of them stabbed him to death.

Drakeo was a young, rising rapper. Critics respected him and rap fans streamed his music millions of times. He was an LA gangsta rapper whose music didn’t sound like what you’d think when you hear “LA gangsta rap” – it’s subdued and anxious, less about the barbecue with your pals and more about looking over your shoulder, double-checking on the footsteps behind you.

Jeff Weiss, the music writer, first covered Drakeo the Ruler in 2017. They met at the LA Men’s Central Jail, where the rapper was being held on a gun charge.

Weiss and Drakeo forged a relationship over the years – under Weiss’ byline, Drakeo appeared in LA Weekly, the LA Times, the Ringer and more.

Drakeo is exactly the kind of guest we’d have on the show – a funny, mess-talking MC with a compelling story and a healthy appreciation for the work of Suga Free. That can’t happen now, and the people who murdered Drakeo are still at large.

So we invited Weiss to our studio in Los Angeles to talk about Drakeo’s music, what it meant to the broader hip-hop community, and his life and death.

As a warning: there’s going to be some discussion about violence, along with crime. If you or someone you’re listening with is sensitive to that, we wanted to give you a heads up.

Liked Jeff Weiss on the life and death of Drakeo the Ruler? Listen to these next...