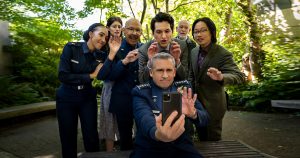 Greg Daniels is a screenwriter, television producer and director. Over the span of more than three decades he’s worked on some of the most beloved comedy television shows.

In the early ’90s he co-wrote the classic Seinfeld episode The Parking Space. Shortly after, he joined the writers room of “Saturday Night Live” alongside Conan O’Brien.

He then took on The Simpsons writers room where he wrote several episodes from the series’ golden age including: Bart Sells His Soul, 22 Short Films About Springfield and Lisa’s Wedding.

Greg Daniels left The Simpsons to co-create King of the Hill with Mike Judge. He later produced and co-created the American version of The Office, and Parks and Recreation.

These days, he still keeps busy. Greg Daniels has two sitcoms in production.

On Amazon, you can watch the second season of his show Upload – a dramedy set in a cloud-backup afterlife.

Netflix’s Space Force, reunites Daniels with Steve Carrell for the first time since The Office. The premise for the show is pretty simple: Carrell plays General Mark Naird, and he heads up the newest branch of the American armed forces.

He’s got a bunch of money and a sort of vague sense of purpose – what could possibly go wrong?

On the latest episode we talk to Greg about his legendary work on television. We dig into everything from Seinfeld, The Simpsons, The Office, King of The Hill and so much more.

Space Force and Upload are streaming on Netflix and Amazon, respectively.

Liked Greg Daniels on ‘The Office,’ ‘King of The Hill,’ ‘Space Force’ and more? Listen to these next...