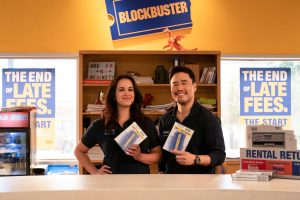 Her latest show is called Blockbuster on Netflix. She’s the creator and showrunner of the show. It’s a sitcom set at the very last franchise location of Blockbuster, the once great video rental chain.

It stars Randall Park and Melissa Fumero in the leads, with a great supporting turn from JB Smoove.Park and Fumero play Timmy and Eliza, respectively.

Timmy has worked at Blockbuster since he was a teen.  These days he’s the manager, and he seems happy enough. He loves his job, but he’s kind of stuck there.

Eliza worked with Timmy back in the day, went to college, and had a kid. But after falling on hard times, she’s back at the Blockbuster. Timmy’s thrilled to have her there, since he’s always had a crush on her.

Together along with the other employees they try to keep the store afloat.

On the latest episode,  we talk with Vanessa about creating the new sitcom, and her own memories of Blockbuster, and what VHS tapes were most important to her. Vanessa also reflects on her childhood in San Antonio, Texas and line dancing in physical education. Plus, how she got her start in comedy and what it was like to be in the writers room for Comedy Central Roasts.

Liked Vanessa Ramos on Netflix’s ‘Blockbuster’? Listen to these next...