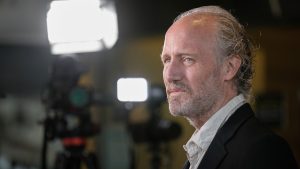 Mike Mills on his new movie, parenthood and more

Mike Mills is a writer and director who’s worked in film, TV, and on music videos. He’s made the films Beginners and 20th Century Women and his newest movie is called C’mon C’mon.

The film centers on two characters. There is Johnny, played by Joaquin Phoenix, and his nine-year-old nephew Jesse, played by Woody Norman. They are not close, but circumstances force them together. Jesse’s mom needs Johnny’s help. She’s in LA with Jesse, but Jesse’s dad is in San Francisco, and he is having a manic episode.

She asks Johnny to take care of her child while she tries to get her ex into the hospital. At first, Johnny moves in with Jesse in LA. It’s not an easy fit, but they start to bond. Then Johnny decides to take Jesse on the road for work.

It’s a film about the extraordinary burdens of parenthood and the ways it changes parents. It’s also about kids and how amazing and resilient they can be, even in the face of serious trauma.

Mike talks with us about C’mon C’mon and how the film connects to his personal experiences with parenthood. He also shares that the film features real interviews with kids conducted by Joaquin Phoenix. Plus, he’ll talk about the role music plays in his creative process and how he always leaves room in the budget for live musicians on set.

Liked Director Mike Mills on C’mon C’mon, parenting and more? Listen to these next...