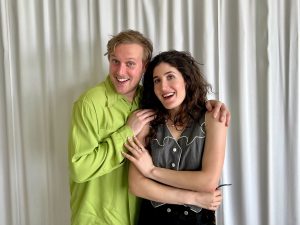 Kate Berlant and John Early are comedians and frequent collaborators. They met in 2012, when a mutual friend booked them to perform on the same show, and have been inseparable ever since. As actors, Kate’s appeared in movies like Sorry to Bother You and Once Upon A Time in Hollywood. John has appeared on Search Party, 30 Rock and The After Party.
Their particular brand of comedy is surreal and a little unhinged. On stage, they veer between intense platonic love in one moment, and in others: seething contempt, thinly masked with backhanded compliments and probing questions. When they do sketches, it’s equally unhinged, but usually surreal and a little unnerving.
Their newest project combines both of those practices into one very funny special. It’s called Would It Kill You To Laugh, premiering this week on Peacock.
Here’s the premise: John Early and Kate Berlant play fictionalized versions of themselves. Decades ago, their characters starred on a smash hit sitcom called “He’s Gay, She’s Half-Jewish.” Shortly after the show wrapped, they had a very public falling out.
Between the sketches in Would It Kill You To Laugh, Kate and John reunite for an interview with journalist Meredith Vieira and it becomes clear that, y’know… it’s been a while, but those old wounds haven’t *completely* healed.

Kate and John talk with Jesse about how they met, how their partnership has evolved over the years and why they get joy out of playing bad people.

Liked Kate Berlant and John Early? Listen to these next...