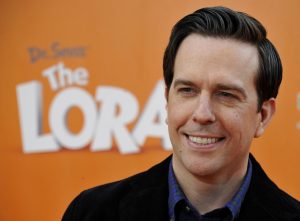 Ed Helms on life after The Hangover franchise, and his new film Coffee & Kareem
Ed Helms got his start as a correspondent on The Daily Show with Jon Stewart. During his run there he also booked a gig on The Office. For seven seasons he played the awkward but lovable Andy Bernard. An insecure Dunder-Mifflin paper salesman prone to occasional rage and acapella singing.

But his breakout role was The Hangover. You probably know the movie – a group of guys take a trip to Las Vegas for a wild bachelor party. They wake up with a hangover and no memory about what happened the night before as they stumble around Vegas trying to piece together the details.The movie was a smash hit. It spawned two sequels.The franchise turned Ed Helms into a movie star.

His latest role can be seen on Netflix’s Coffee & Kareem. It’s an action comedy with a sweet side. In it, he portrays a Detroit cop named James Coffee. Coffee isn’t really good at his job. He doesn’t get a lot of respect at the precinct – in fact, he let a big time criminal go. But then, he’s thrust into action: Coffee has rescue his girlfriend and her twelve-year-old son Kareem after the boy witnesses a murder.

Ed Helms joins to chat about The Hangover trilogy, and how it changed his life. Plus, he’ll chat about his latest role in the buddy cop comedy Coffee & Kareem. Ed’s been spending a lot of time at home. How does he pass the time? The answer might surprise you!

Liked Ed Helms? Listen to these next...

Carrie Coon on ‘The Leftovers,’ ‘Fargo’ and ‘The Nest’