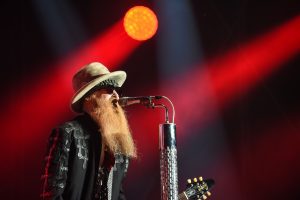 Rock legend Billy Gibbons on his career, his style and more

Billy Gibbons is a man who needs little introduction.

He’s the lead singer and primary guitarist for the legendary rock band ZZ Top. With the dark shades, highly-curated accessories and signature long beard that would put Samson to shame, he has a rock-god persona that most can easily identify.

Texas born and raised, the artist who sometimes goes by the name “The Reverend,” comes from a long line of entertainers.  He was born the son of a concert pianist. In fact, several members of his extended family worked in show business before he received his first taste of glitz and glamour at the early age of five years old! It was that year that his mother took him and his sister to see Elvis Presley perform. At only seven, his father took him to see blues artist BB King. The music bug took hold early and its roots grew deep.

He formed his first major band after attending art school—The Moving Sidewalks. They had their first hit with their single “99th Floor” which led to the band opening for The Jimi Hendrix Experience.

The band was inducted into the Rock and Roll Hall of Fame in 2004 in part due to their signature guitar churning sounds, suggestive lyrics and highly stylized music videos.

But behind the ~idea~ of ZZ Top is something a lot more interesting: the ~band~  ZZ Top. A psych-influence blues rock band that is still cutting great stuff to this day. The band has a fascinating story, too, one that’s covered brilliantly in the recent documentary ZZ Top: That Little Ol’ Band from Texas.

Billy joins Bullseye in our last pre-quarantine IRL interview to talk about the group’s legacy, their blues and psychedelic roots and his keen sense of style. Plus, he’ll tell us how a BBQ joint became responsible for that legendary ZZ Top sound. All that and more on the next Bullseye!

Tour dates for the band are currently postponed due to the COVID-19 pandemic but look out for them in 2021.

In the meantime, stream ZZ Top: That Little Ol’ Band from Texas today.

Liked Billy Gibbons of ZZ Top? Listen to these next...