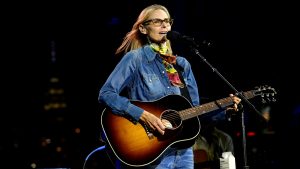 Content Warning: This segment contains some talk around the topic of suicide. Nothing graphic, but an acknowledgement of it. If you or someone you know may be considering suicide, contact the National Suicide Prevention Lifeline at 1-800-273-8255.

The Song That Changed My Life is a segment that gives us the chance to talk with some of our favorite artists about the music that made them who they are today. This time around, we’re joined by Aimee Mann.

Aimee is a singer-songwriter whose career dates back to the 80s when she sang in the new wave band Til Tuesday. However, odds are you know Aimee for her solo career. She earned an Academy Award nomination for her work scoring Paul Thomas Anderson’s Magnolia. She’s also won two Grammy awards, including one for best folk album for her 2018 record Mental Illness.

Aimee has recently followed up Mental Illness with a very different record called Queens of the Summer Hotel. The songs on the record started when Aimee was working on a stage version of the book Girl, Interrupted. The stage show hasn’t happened, but the record is out now. It’s somber, delicate and beautiful.

When we asked Aimee about the song that changed her life, she took us back to 1972, to the first time she ever listened – really listened – to lyrics in a pop song. The song was Gilbert O’Sullivan’s Alone Again (Naturally).

Liked The Song That Changed My Life: Aimee Mann? Listen to these next...