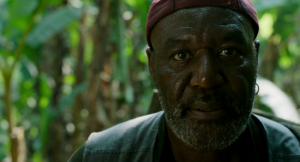 The latest Spike Lee joint, Da 5 Bloods follows the story of four Black Vietnam war veterans who return to Saigon, now Ho Chi Minh City. Officially, they’re looking for the remains of their fallen squad leader. Unofficially… they’ve returned for buried treasure. Somewhere in the jungle there’s a bunch of gold they left behind during the war.

The film features an all-star ensemble cast: Clarke Peters and Isiah Whitlock Jr. from The Wire, Jonathan Majors from The Last Black Man in San Francisco and Lovecraft Country, and the late Chadwick Boseman.

Delroy Lindo’s portrayal of war veteran Paul completely steals the show. It’s an emotional, raw depiction of a very complex person who’s been through immense trauma. The performance is breathtaking.

Paul returns to Vietnam a changed man: a widower whose son is tagging along for fear of what might happen to his Dad. A veteran who’s struggled to cope with the trauma of war. And on his head: a Make America Great Again hat.

Returning to the land which caused all of them so much pain opens old wounds and reignites unresolved heartache.

Public radio veteran Ray Suarez talks with Delroy Lindo about Da 5 Bloods. Delroy reflects on the previous times he worked with Spike Lee almost two decades ago. Plus, Delroy was born in London, spent part of his life in Canada, and only came to the US in his late teen years. He talks about how that experience has influenced his craft.

Liked Delroy Lindo on ‘Da 5 Bloods’? Listen to these next...