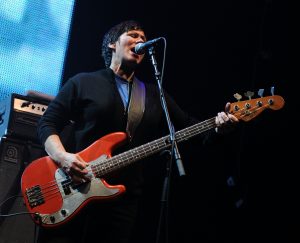 Kim Deal on her work with the Pixies and The Breeders

Born and raised in Dayton, Ohio, Kim Deal started in music by playing guitar with her twin sister Kelley. Unlike a lot of kids with guitars that age – they never really formed a band, played any shows, or toured.

In the mid 1980s, she got married and moved to Boston, and after she got settled in, replied to a classified ad looking for a bassist. Out of that exchange, she and three new friends formed the Pixies. The group became indie rock tastemakers, but they never produced a real chart topping hit.

During what ended up being a 10+ year hiatus for the Pixies, Deal formed The Breeders who eventually went on to create the smash hit “Cannonball.” She wrote the song for their 1993 album “Last Splash,” which made it to the US Billboard Hot 100 and got constant play on MTV.

In the 28 years that have passed since, The Breeders have broken up and reformed a handful of times and toured sporadically. Through it all, Kim’s had a knack for writing honest, sincere rock songs.

When we spoke with her in 2018, Kim also talked about bringing The Breeders back together to record “All Nerve,” their first new record in almost ten years.

On March 10, 2021, they released a new song called “The Dirt Eaters,” which is a cover from the band His Name is Alive. The song is part of a compilation project celebrating the 40th anniversary of the independent UK record label 4AD.

Liked Kim Deal of The Breeders? Listen to these next...