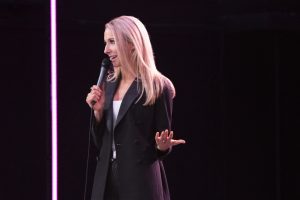 Nikki Glaser on her new comedy special Bangin’
Nikki Glaser knows that when most people think of her comedy, they think of sex. It’s hard not to. In her over fifteen year career, Nikki has made a name for herself combining sharp wit and bawdy comedy. In her most her most recent standup special Bangin’, she takes on the ugly details of modern sex and dating with the fearless and hilarious precision that has become her trademark. But Nikki Glaser is no one trick pony.

She is an accomplished standup comic. She’s also hosted shows on Comedy Central, most recently the series Not Safe with Nikki Glaser, MTV’s late night comedy show, Nikki and Sarah Live and makes regular appearances on Comedy Central’s Celebrity roasts. If you’ve seen her in one of those, you probably remember her as the comedian delivering the most devastating, cutting joke in a night dedicated to devastating, cutting jokes. Her ability to take down her targets with a pointed one-liner is virtually unmatched among her fellow comedians.

We talk with Nikki about her new special, Bangin’. Plus we discuss how she’s keeping her stand-up sharp during quarantine, why she quit drinking, and what kinds of jokes she thinks are off-limits during a roast.

Her special Bangin’ is seriously one of the funniest things to come out recently. She also hosts her own podcast, which you should check out. It’s called “You Up with Nikki Glaser” – download it off your favorite podcatcher. Bangin’ is currently streaming on Netflix US.

Liked Comedian Nikki Glaser? Listen to these next...