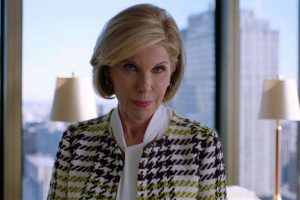 Christine Baranski is an actor with an impressive resume. She went to Juilliard, performed on Broadway in shows like The Real Thing, Rumors, and House of Blue Leaves – she’s won two Tony Awards.

On the hit sitcom Cybil she played the title character’s best friend, Maryann and won an Emmy award for the role. Baranski’s an iconic character actor with a distinctive look that commands your attention on screen.

In 2009, she got a part on the CBS show The Good Wife. It was a legal and political drama that starred Juliana Marguiles. Baranski played Diane Lockheart on the show.

Critics loved The Good Wife. It was immensely popular, too. When the series wrapped, Baranski got her own spinoff: The Good Fight. Once again the show was a hit. Like its predecessor, The Good Fight is a drama but the show is also pretty wacky and funny. The Good Fight just started airing its 6th and final season, you can watch it on Paramount Plus.

Baranski reflects on her time portraying Diane on The Good Fight. Plus, she talks about being one of the early graduates of Juilliard, and her long-time collaborated relationship with Broadway legend Stephen Sondheim.

Liked Christine Baranski? Listen to these next...