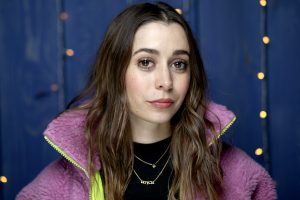 Cristin Milioti is an actor who’s been in a lot of stuff lately. She’s in the HBO show Made for Love, the new Peacock series The Resort and she’s appeared on FX’s Fargo and in the Wolf of Wall Street.

When we talked with her on Bullseye, she had just starred in 2020’s Palm Springs. Cristin plays Sarah in the movie, opposite Nyles who’s played by Andy Samberg.

Palm Springs is kind of hard to describe. It’s a romantic comedy, but it’s also a movie about a time loop, like Groundhog Day or Russian Doll. There’s some action, too, like when Nyles gets chased by a guy with a crossbow who’s also stuck in the time loop.

But Palm Springs is more than a clever premise. It’s a funny and unique movie about relationships, about depression, and about what it means to be alive.

Linda Holmes, the host of NPR’s Pop Culture Happy Hour, conducted the interview. They talk about Palm Springs and Cristin’s roles on shows like How I Met Your Mother, 30 Rock and in the Tony Award-winning Broadway show Once.

Liked Cristin Milioti? Listen to these next...