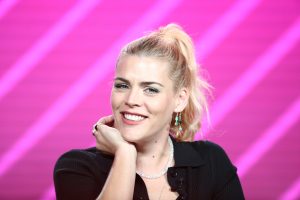 Busy Philipps on Girls5Eva, Freaks and Geeks, and more

Busy Philipps first big break came when she was just 20 years old. She starred alongside Seth Rogen, Linda Cardellini, and Jason Segel in the acclaimed and influential TV show Freaks & Geeks. She followed that up with an appearance on Dawson’s Creek and has since amassed well over 60 credits on the big and small screen.

These days, Busy is starring in Girls5Eva. It’s a show about a fictional girl group. Think equal parts Spice Girls and N’Sync. They had a handful of smash hits right at the turn of the millennium. Their videos were on MTV, their logo was on kids’ backpacks all across America, and then, like a lot of bands from that era, they faded away.

But things change when the show begins. Seemingly out of nowhere, a hot young rapper samples one of Girls5Eva’s hits and suddenly, the band is getting buzz again. The remaining members have a shot at revitalizing their careers. Only, it’s been almost two decades.

Busy Philipps plays Summer on the show. Summer is the self-proclaimed “hot one” of the group. Since the band broke up she hasn’t done much in the entertainment world, aside from bombing a handful of Real Housewives auditions.

The series was created by Meredith Scardino and is executively produced by Tina Fey. You can stream the entire first season of Girls5Eva right now on Peacock. It was also just confirmed for a second season.

Busy Philipps joins guest host Jordan Morris to talk about Girls5Eva, the resurgence of Freaks and Geeks in the age of streaming, and the moment she realized she wanted to make a career out of acting. Plus, she takes a Spice Girls quiz to see what group member she is.

Liked Busy Philipps? Listen to these next...