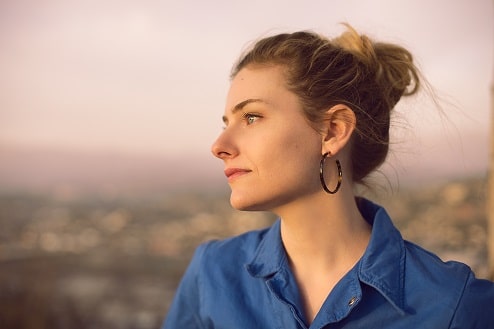 Lisa Hanawalt is a cartoonist, writer, and author of four brilliant books, including “Hot Dog Taste Test” and “My Dirty Dumb Eyes.” Her latest book, “Coyote Dog Girl,” is also great. She also co-hosts a podcast here at Maximum Fun called “Baby Geniuses” along with the comic Emily Heller. You may be familiar with her work on the popular animated Netflix series “BoJack Horseman” where she’s a producer. Hanawalt is the creator of the new show “Tuca & Bertie.” It’s an animated series on Netflix and it’s very funny.

Tuca & Bertie is a show about two women. Anthropomorphic bird women, to be exact. They live in Bird Town. Tuca is a toucan. She’s outgoing and fun, but kind of a mess, too. She doesn’t really have a solid job. Bertie, her best friend, is a songbird, kind of a homebody, a little shy and deferential. When the show starts, she’s just moved in with her boyfriend.

A lot of the problems Tuca and Bertie encounter are fairly human and grounded: relationship stuff, work problems, sexual harassment. But the world they live in is anything but. The show is breathtakingly drawn and totally surreal: Phones talk. Hospital equipment talks. Plants walk. Lisa based Tuca & Bertie off of characters from her books, characters she’s lived with for a long time and sees sort of as extensions of herself.

Lisa talks to us about how intuitive creating Tuca & Bertie was at times,on deciding what to ground in reality and where to take flight, and why she should be allowed to ride Martha Stewart’s pony.

A quick warning about this interview you’re about to hear: there’s some talk about sex in it, mostly just talking about body parts. If you or someone you’re listening with might be sensitive to that kind of thing, we’re giving you a heads up now.