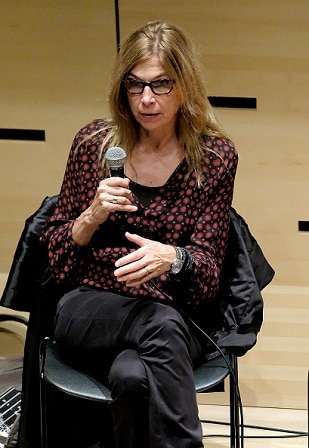 Photo: Jamie McCarthy/Getty Images
Director Sara Driver on independent filmmaking and her love for the “old” New York.
Sara Driver, is an artist and filmmaker. She’s a part of the Manhattan independent filmmaking renaissance that the city underwent through the late 1970s through the 90s. When we spoke with the director and actor in 2018, she had just directed a new documentary called Boom For Real: The Late Teenage Years of Jean-Michel Basquiat. The movie shows a side of one of the great 20th century artists not often seen – a savvy young upstart painting on the walls all over Manhattan’s Lower East Side.

Driver, an artist herself, lived and worked in the same art community that propelled Basquiat to stardom. And because of that, Boom For Real kind of tells two stories: there’s Basquiat’s – who shows up in archival footage but never speaks. And there’s New York City’s. Pre-9/11, pre-Reagan, pre-real estate boom. Boom for Real strikes a careful balance between nostalgia and danger, between nuance and hero worship.

The filmmaker discusses what it felt like to capture on film a New York of old, particularly for working artists, and why Whole Foods makes her nostalgic for the past.