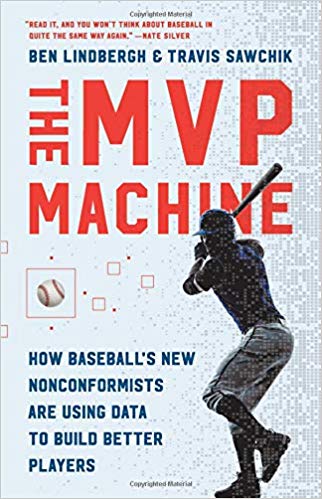 Chances are you’re aware of the change in baseball strategy due to a little film called Moneyball. The film, and the book before it, recounts how general managers and recruiters turned to statistical data and probability to arm their teams with the best players in the league. But with the Yankees and the Dodgers and just about every other team in the league all using the same strategy, the efficacy of this method began to wane. That’s where The MVP Machine: How Baseball’s New Nonconformists Are Using Data to Build Better Players comes in.

The book gets into how a lot of conventional coaching in the big leagues is totally wrong. Throwing your fastball a lot? Wrong. Having a nice even swing? Wrong. Striking out a lot? Who cares! Furthermore, the book examines the dramatic changes happening in the league and how data technology and innovations in coaching are disrupting the front offices as well as lineups. It’s a fascinating look at the history of baseball and the potential future that lies ahead.

The MVP Machine is available now.