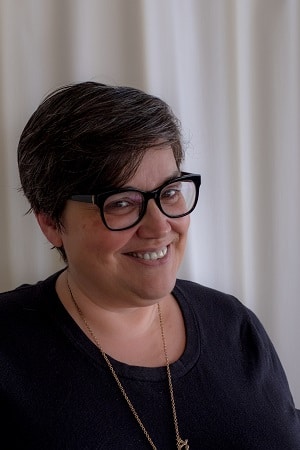 Photo: Jesse Thorn
Writer Linda Holmes on her debut novel “Evvie Drake Starts Over.”
If you’ve arrived from a far-off galaxy and need to quickly ascertain what the most worthy bits of pop culture information are to take back to your home planet, you’d do no better than following the musings of Linda Holmes. Holmes, a pop culture critic and one of the hosts of the NPR podcast Pop Culture Happy Hour is smart, witty, and very funny. She has amazing taste in TV and movies and loves to talk about it. She even recently convinced us that the entire cast of that new Sonic movie is worth pulling for and well… you saw the trailer.

But Linda’s first love has always been writing. She’s just released her debut novel titled Evvie Drake Starts Over. It’s about a young woman dealing with the grief of losing a husband whose life intersects with a major league baseball pitcher who is experiencing a slump in his season.

Linda could have mailed it in. She could have turned in 300 pages about a great TV show or band you’ve never heard of, but you’ve probably got a million of those types of books on your bookshelves and tablets already. Instead, she decided to write a book about love, loss, and the power of starting over. It’s quite good.

Evvie Drake Starts Over is out now.