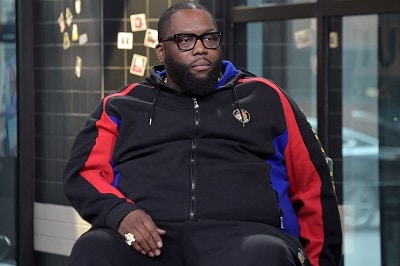 Photo: Dia Dipasupil / Getty Images
Killer Mike on his new Netflix show ‘Trigger Warning’
The last time we spoke to Killer Mike, he was just coming off the release of his solo album, “I Pledge Allegiance to the Grind” back in 2007. Twelve years later, he’s is still on that grind and busier than ever.

Nowadays he’s one-half of Grammy nominated duo Run the Jewels with partner El-P. Together they’ve put out three great albums – with a fourth on the way later this year. Now, he’s in his very own Netflix series, “Trigger Warning with Killer Mike.”

In the show, Killer Mike tackles some of the most complicated racial and societal issues in America through social experiments. In the series, he tries to unpack subjects like religion, the black economy, education, and gangs.

In one experiment Killer Mike examines the hypocrisy behind celebrating violence and criminal activity. He rationalizes that if a biker gang like Hells Angels can sell merchandise on Amazon and capitalize on America’s fascination with the “bad guys,” perhaps a gang like the Crips could do the same. He spends the episode trying to bring a product called “Crip-A-Cola” market. The result is quite funny, and very brilliant, too.

Killer Mike joins us to talk about his new Netflix series. He’ll chat about the genesis of Run The Jewels and what it’s like to collaborate with El-P. Plus, how he became friends with legendary comedian and activist Dick Gregory, and what it was like hitting the road campaigning with Bernie Sanders.