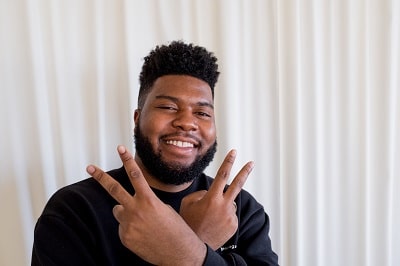 Photo: Jesse Thorn
Khalid on his wild ride to fame, and making intimate R&B music
R&B singer Khalid has recorded about a dozen legitimate hit songs. He’s sold millions of albums. Plus, has hundreds of millions of plays on streaming apps. He plays to huge crowds. Madison Square Garden. MGM Grand Garden. Staples Center. You can catch him on tour this summer at an arena near you.

Khalid’s breakthrough single was called “Location.” It was one of the first songs he ever wrote. He was 18 when it dropped. He’s only 21 now. People thought he was easily 10 years older. There’s a richness to his voice, a kind of grace, too. He sings like a person who’s seen some stuff. Khalid doesn’t really record outright dance tracks, but he doesn’t have a lot of ballads, either. His songs are steady. They’re almost always plainly spoken.

His debut album American Teen was a sincere look at what he believes it’s like to be young person nowadays. Songs like “Young Dumb & Broke” and “Another Sad Love Song
“ convey emotions most teenagers have, but his songwriting shines when he’s specific and intimate. In “8Teen,” he’s concerned his mom is going to kill him because his car smells like weed. You know teenager stuff.

He’s got a new record coming out later this week, it’s called Free Spirit. Khalid tell us about the weird, amazing world of being super famous. We’ll also talk about his childhood, growing up in and around several different army bases. And why some people have a hard time believing he’s only 21. We know Khalid can sing, but can he rap? We’ll get him to freestyle some bars. You don’t want to miss it!