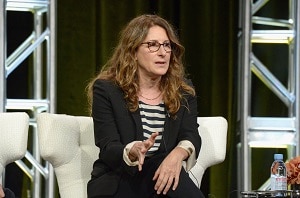 Photo: Charley Gallay / Getty Images
Writer and director Nicole Holofcener on her new film: ‘The Land of Steady Habits’
Nicole Holofcener is a writer and director probably best known for her films “Friends with Money” and “Enough Said.” She’s also worked on TV shows like “Parks and Recreation,” “Orange is the New Black” and “Sex and the City.” Her latest project is a film called “The Land of Steady Habits” – it’s out now on Netflix. 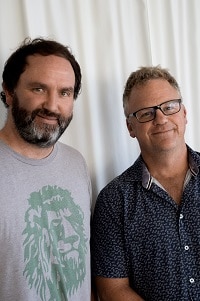 Photo: Jesse Thorn
Jim Gavin & Peter Ocko on the new Television show ‘Lodge 49’
AMC has produced some of the most stunning dramatic television programs in recent memory. “Mad Men,” “Better Call Saul,” and “Breaking Bad” come to mind – but they’re television shows that are grounded in gritty realities. “Lodge 49” is one of the newest shows on AMC, and it’s a drama like you’d expect from the network. But it’s on a different wavelength, and it’s very funny.

The show’s about Sean “Dud” Dudley. He’s a 30 something burnout who lives in Long Beach, California. One day he’s metal detecting on a beach and he finds a ring. He asks around, and it turns out it belongs to a lodge for this secret society – the Order of the Lynx. Sort of like the Freemasons or the Elks. The ring brings him into the lodge, and before long, he becomes a member. He’s fascinated by the robes and rituals, charmed and befriended by the members. He gets swept up by the mythology and mystery.

We spoke to Jim Gavin, the show’s creator; and Peter Ocko, a TV veteran, showrunner and Executive Producer for “Lodge 49.” They’ll give us the scoop on all the quirks of the show, and their fascination with fraternal organizations. Jim Gavin grew up in Long Beach, naturally, we asked him some extremely specific Long Beach questions. 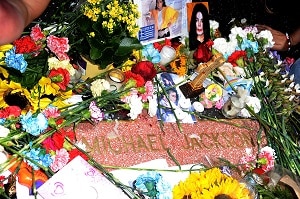 Photo: Frazer Harrison / Getty Images
The Outshot: The genius of Michael Jackson
Michael Jackson sang some of the greatest pop hits of all time, but who was the real genius behind those tracks? Michael Jackson, of course!