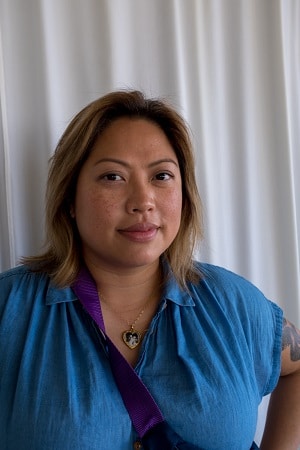 Photo: Jesse Thorn
Director Kulap Vilayack on her new documentary “Origin Story.”
You’re probably familiar with the work of Kulap Vilaysack already. Odds are it’s because she made you laugh. Maybe it was on her podcast,Who Charted, which ran for 8 years on the Earwolf network. Maybe you know her from Bajillion Dollar Properties, a show she created which ran on the Seeso network. Maybe you’ve seen her in a TV role. Kulap has appeared in dozens of shows. She’s been on Bob’s Burgers, Comedy Bang Bang, and Children’s Hospital, just to name a few. One of our favorites was probably her part in Parks and Recreation.

For as long as Kulap has been a working actor, comedian, and showrunner she’s been working on a different project in the background. A very special project. It’s a documentary called Origin Story. Kulap makes her feature-length directorial debut and is the center of the film. It’s about family secrets, learning to adapt to them, to empathize with difficult parents, and to connect with brand new ones.

Kulap was raised in Minnesota. Her parents were both refugees from Laos. One night, during a family argument, her mom told her something that would change her life completely: that the man who had raised her isn’t her birth father.

In Origin Story, Kulap confronts her history head on. She reckons with her parents, her mom, in particular. She talks about identity and her experience as a second generation immigrant. She finds her birth father, and goes to Laos to meet him. The film is moving. It’s healing. We just can’t recommend it enough.

Origin Story, is a really compelling, affecting film. You can stream it now on Amazon. If you haven’t checked out her show Bajillion Dollar Properties… well, it’s completely different from Origin Story in pretty much every way, but it’s also great. It’s streaming on a handful of platforms, including Amazon.