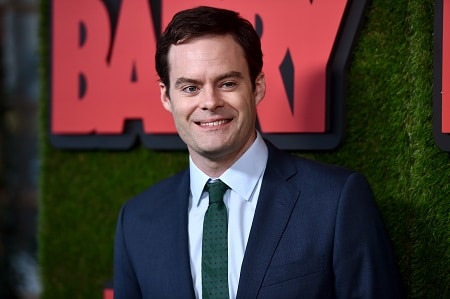 Photo: Alberto E. Rodriguez/Getty Images
Season 2 of Barry premiers March 31
You know Bill Hader from his time on Saturday Night Live. He was kind of an impressions guy – he did a mean Vincent Price. His most famous character was Stefon, from the Weekend Update sketches. He left the show in 2013 and went on to perform in movies like Trainwreck, Inside Out and the smash hit Sausage Party. Along with Fred Armisen, he also starred in the IFC show, Documentary Now!.

His latest project is an HBO TV show called Barry, which enters its second season later this month. Hader stars as the show’s title character, Barry Berkman. Barry’s an ex-marine, turned low rent hitman in Ohio, turned aspiring actor in Los Angeles. Bill tells Jesse about working as a production assistant when he first came out to Los Angeles, the influence his parents had on his taste in film, and the struggle he had to project his voice.