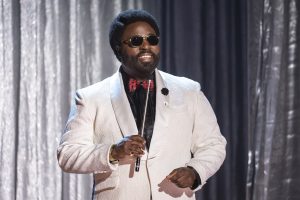 Bashir Salahuddin is a comedy actor and writer. He attended Harvard where he met his friend and longtime collaborator Diallo Riddle. They worked together as writers on Late Night with Jimmy Fallon, before leaving to work on their own projects.

One of their projects is South Side. It’s a very funny sitcom set in Chicago starring both Riddle and Salahuddin. It follows two friends on Chicago’s South Side seeking different business ventures while working at a rent-to-own shop. It also intertwines stories and subplots from other residents living in the neighborhood.

The other show they created is Sherman’s Showcase. It’s sort of like a sketch show, but with a unique format. It’s set up like a variety show with elements comparable to those you might find on Soul Train, The Muppet Show and even Laugh-In.

Bashir stars as Sherman McDaniels, who’s been hosting Sherman’s Showcase for nearly forty years. Each episode looks back on some of the show’s greatest hits including musical numbers, clips from Sherman’s movie and TV work and more.

Bashir Salahuddin stops by Bullseye to talk about Sherman’s Showcase, and shares how it draws inspiration from shows like Soul Train and The Muppet Show. He also talks about meeting his friend Diallo Riddle while in an acapella group at Harvard. Plus, Bashir shares how casting real Chicagoans in South Side has helped make the series even more hilarious.

Liked Bashir Salahuddin on Sherman’s Showcase and South Side? Listen to these next...