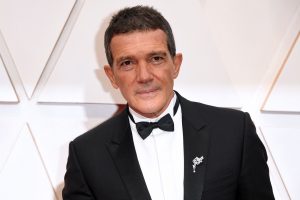 Award-winning actor Antonio Banderas is probably one of the most versatile, charming, and handsome actors out there today. You’ve probably seen him in Zorro, Philadelphia, Desperado, or maybe heard him in Shrek – he played the voice of Puss in Boots.

When we talked in 2019, he’d just taken on a very different role – one he said was among his most challenging.

His friend and frequent collaborator, director Pedro Almodóvar, had a new script for a film called Pain and Glory. It’s about a guy named Salvador Mallo, Banderas’ character. He’s a director that made a handful of well-regarded sex comedies in the 80s. He’s got a nice apartment in Madrid and is a bit stuck.

He isn’t really making movies anymore and hardly has the drive to go out. He’s crippled by his maladies which include headaches, back pain, and asthma.

All of that pretty much describes the film’s director, Pedro Almodóvar, to a tee. And in casting Banderas, someone who’s known him for decades now, he made the film all the more personal. Banderas’s character in Pain and Glory wears Almodóvar’s clothes, grows the same facial hair, and lives in a replica of his Madrid apartment.

The performance Banderas gives is beautiful. It isn’t an impression where he tries to channel Almodóvar. Instead, he personifies the director’s pain and his need to still create, despite the suffering.

His latest project is The Hitman’s Wife’s Bodyguard, which comes out in theaters this week. He plays the villain, up against Salma Hayek, Samuel L. Jackson, and Ryan Reynolds.

We revisit our 2019 conversation with Antonio Banderas to discuss Pain and Glory. Plus Banderas talks to Bullseye about his childhood in Spain, connecting with people through pain, and reuniting with director Pedro Almodóvar. He’ll also talk about how he learned the lines to Mambo Kings, before he became fluent in English.

Liked Award-Winning Actor Antonio Banderas? Listen to these next...