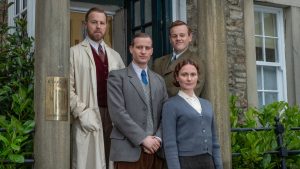 All Creatures Great and Small tells the story of a Scottish veterinarian who moves out to the English countryside.

It started as a book series written under the pen name James Herriot. It’s set in the ’30s, between the wars. In each chapter, Herriot drives around the Yorkshire Dales in an old car, from farm to farm, appointment to appointment. He treats horses, cows and dogs in neighboring villages.

We get to know the farmers through Herriot while we take in the details of the characters homes, and the landscape.

The books inspired several movies. In the ’70s and ’80s, the books also became a TV series of the same name on the BBC.

There’s a brand new television series based on the book. It premiered on channel 5 in the UK last year, and it just made its debut on PBS in the states.

The show features a whole new cast in the story of young James the vet, his boss Siegfried, Siegfried’s brother Tristan, and a lot of other characters Herriot aficionados know and love. Like the books and the TV show before it: it’s gentle, funny and bursting with love.

We talk about the latest reiteration with Ben Vanstone, writer and showrunner who created the new reboot. Plus, there’s quite a few animals on the show, but who’s Ben’s favorite? Listen and find out!

Liked ‘All Creatures Great And Small’ showrunner Ben Vanstone? Listen to these next...