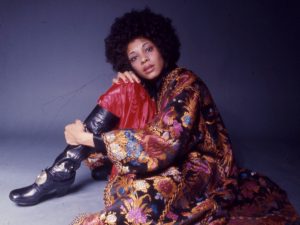 Betty Davis died earlier this month. She was 77. She was the very definition of a cult hero – she never cut a hit record, but her influence is still strong today.

She made music that was uncompromising and raw. Her style was somewhere between Screamin’ Jay Hawkins and Sly – visceral, aggressive, and absolutely peerless.

Davis’ music was absolutely unforgettable – but she looked, if anything, more outrageous. Like a funky Barbarella with a two-foot-wide Afro.

Her band was the best of the best: Larry Graham and Greg Errico of Sly and the Family Stone. The Pointer Sisters singing backup. Pete Escovedo playing timbales. Neal Schon and Buddy Miles playing guitar.

Even her husband was influential. (That’s Betty Davis as in Miles Davis – they say she convinced him to listen to Sly Stone and make Bitches Brew.)

Davis put out the sum total of her records in about three years. In that time she recorded four albums, each a classic. And she wasn’t just singing – she was in charge. She wrote and produced the records at a time when not many women had the chance to do so.

And then, in 1980… she stopped. She retired from music altogether and moved back to Pittsburgh, where she grew up.

She didn’t do interviews. She didn’t play reunion shows. As far as the public was concerned, she disappeared completely. She was like a ghost. A Scandinavian fan tracked her down in the suburbs just to let her know that ASCAP owed her a few hundred thousand dollars in songwriting royalties.

When we talked to Davis in 2007, Light in the Attic Records was rereleasing her discography. They’d had to track her down to get the rights, and she hadn’t done any press in 25 years.

She agreed to talk with us, only by phone, and only if the call was routed through the record label and patched through to her. She didn’t want to go to a studio and she didn’t want anyone to have her phone number.

It was a strange experience to call one of the boldest and most outrageous voices in pop music history, and have a gentle, quiet, delicate woman answer. She was never less than cordial, but every answer felt like hard work.

Betty Davis. There will never, ever be another like her.

This interview originally aired in 2007.

Liked Remembering Betty Davis? Listen to these next...