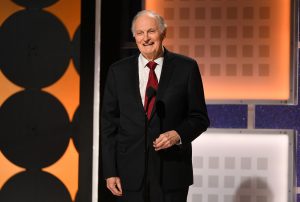 Alan Alda has been acting for over six decades. He played the iconic role of Hawkeye in M*A*S*H, was Arnold Vinnick on The West Wing and starred in several other memorable roles over the years. He is also had parts in a number of films and performed on Broadway. He is a six-time Emmy winner and has been nominated for an Academy Award, three Tony’s and a Grammy.

Alda is also an almost-journalist, a communicator and an interviewer. For almost thirty years now it has been his second career. First on television in the PBS series Scientific American Encounters and now on his podcast, Clear+Vivid.

The 86-year-old Alda has headed up the show Clear+Vivid for 4 years now. It has not just been a way for Alda to talk with his friends about their latest movie or the good old days. Sure, some of the guests are his friends, but there are also scientists, researchers and writers he admires. One listen to Clear+Vivid and you can tell that Alda has found his passion as a podcast host.

Alan Alda joins Bullseye to talk about Clear+Vivid and dives into some of the different guests he has had on the show. He also shares what it was like when M*A*S*H, the television show that gave him his big break came to an end. Plus, he talks about his years performing improv.

Liked Alan Alda? Listen to these next...