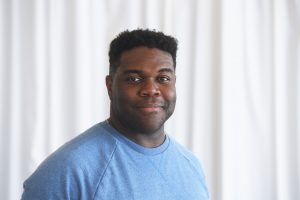 Sam Richardson on Werewolves Within, Detroiters, and being terrified of spiders

On the latest episode we welcome back Sam Richardson! The comedic actor was born in Detroit, and he has a Ghanaian mother. His childhood was split between the two places.

After college, Sam moved to Chicago to pursue comedy through The Second City improv theater. He then moved to LA where he landed a couple of small roles in TV comedies like The Office and Arrested Development.

But his breakthrough role came in HBO’s Veep. The political satire starring Julia Louis-Dreyfus where everyone is terrible, mean, incompetent, and they all hate each other. Everyone, except Sam’s character, the cheerful, incorruptible Richard Splett.

Sam is also a writer. With the help of Saturday Night Live alum Tim Robinson, together they co-created and starred in Detroiters, a show about two buddies working for an advertising firm in Detroit.

Sam Richardson has a brand. He typically plays cheerful, friendly characters who are usually so nice they end up getting in their own way.

Recently, he’s been trying different kinds of roles. He has the lead role in horror comedy Werewolves Within, and he starred alongside Chris Pratt in the sci-fi action film The Tomorrow War.

He joins Jesse Thorn to talk about branching out, Werewolves Within, Detroiters, and what it was like growing up between the United States and Ghana. Plus, they’ll discuss some of his funniest bits from Tim Robinson’s sketch comedy show I Think You Should Leave. But if there’s one thing you should know about Sam, it’s that he really hates spiders. We get into it and so much more.

Liked Sam Richardson? Listen to these next...