It’s Larry King! You know, the real Larry Legend — the guy so famous that all you’d have to do is draw a stick figure with a pair of glasses and suspenders, and you’d know it was him. Otherwise you know him from Larry King Live, CNN’s most watched show ever that ended in 2010 after a remarkable 25-year run. Larry’s pretty much interviewed everyone over his 60 years in broadcasting: actors, world leaders, superstar athletes, UFO experts, even Eleanor Roosevelt.

Prior to his CNN show, Larry did a bunch of different things in broadcasting: he had a nightly radio show on the Mutual Broadcasting System that ran for many years. Larry was also a sports color man for the Miami Dolphins during their perfect season. But interviewing has been the main thing that has held together his career.

For this episode, Jesse visited Larry King at his palatial home in Beverly Hills. They sat in his trophy room, literally surrounded by bookcases full of Emmy awards and letters from U.S. presidents. 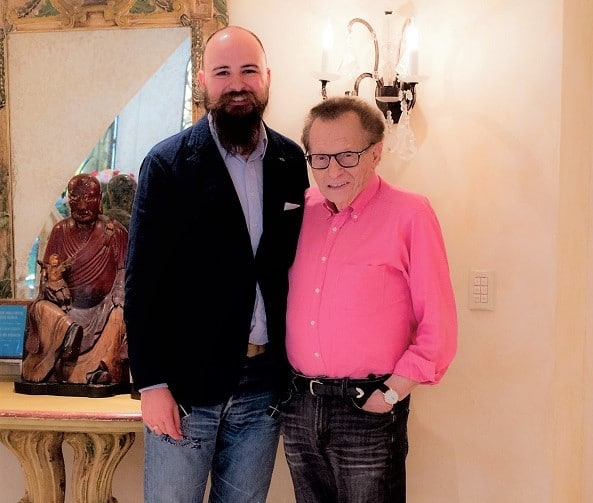 Despite his rise to celebrity from humble beginnings in Brooklyn, Larry has always considered himself an every man. He explains to Jesse why being “dumb” — knowing relatively little about his subjects and asking them simple, obvious questions — has been his greatest asset as an interviewer. Very much a creature of live broadcasting, he loves the thrill of going into an interview cold and not knowing what’s going to happen next.

Larry’s a natural storyteller, and he tells Jesse about what it was like to interview guys like Richard Nixon and Frank Sinatra. He gets introspective too, talking about both his proudest accomplishments and deepest regrets, as well as his biggest fear: death.

You can catch Larry still doing his thing after 60 years on his new show Larry King Now, available on Ora TV and Hulu.