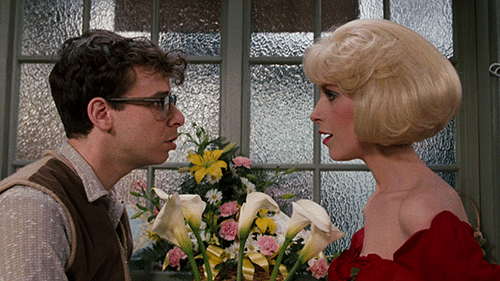 Mo Perkins earned an MFA in directing from UCLA’s School of Film and Television. Her master’s thesis film, Piss Hat, was nominated for a student Academy Award. Her writer/directorial debut feature was an independent film called A Quiet Little Marriage starring Mary Elizabeth Ellis, Cy Carter, Jimmi Simpson, Michael O’Neill, Charlie Day and Melanie Lynskey. On the festival circuit, it won many awards including the Grand Jury Prize at Slamdance, and it was distributed by IFC. Her second feature film was a comedy called The Last Time You Had Fun starring Demetri Martin, Eliza Coupe, Mary Elizabeth Ellis, Charlene Yi and Kyle Bornheimer. The film premiered at the Los Angeles Film Festival and was distributed by Gravitas Ventures. Most recently Mo directed the second season, six episodes, of a romantic musical comedy called I Ship It for the CW.

The movie that Mo has chosen is just a delight – 1986’s Little Shop of Horrors. Mo discusses how this movie meant so much to her personally, as it was one of the first films she saw after leaving her commune. April and she talk about the two different endings of the film and how the original was roundly rejected by preview audiences. Mo also elaborates on being flexible during shoots, working on low budget films, and facing the scenes that she was scared to direct.

You can see I Ship It on the CW.

And if you haven’t seen Little Shop of Horrors yet, go watch it!

With April Wolfe and Mo Perkins.