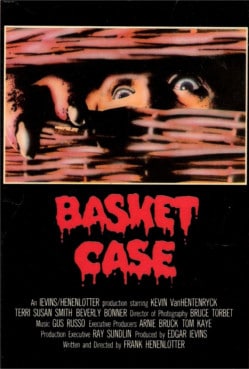 This week we’ve got fellow Maximum Funster, podcast host of Reading Glasses, actor, writer, and director, Brea Grant. She has chosen, maybe, one of the most fun and fascinating movies we’ve discussed on the show, 1982’s cult classic, Basket Case. The story follows a young man named Duayne, who keeps his formerly conjoined, mutant brother Belial in a picnic basket. Duayne and Belial move to New York in order to seek out and murder the doctors who surgically separated them. A truly lovely tale that April and Brea fully dissect. They go in depth on what makes this gritty, New York classic just so memorable; the commitment of the actors, the gore, and the execution of the ridiculous concept. Brea also details the life of a working actress. She explains the struggle of acting in a movie that never gets released, returning clothes for an audition to the store, and always carrying around a peanut butter and jelly sandwich. This is a truly fun episode that touches upon the honorable practice of making art for the sake of making it.

And if you haven’t seen it yet, go watch on Basket Case

With April Wolfe with Brea Grant