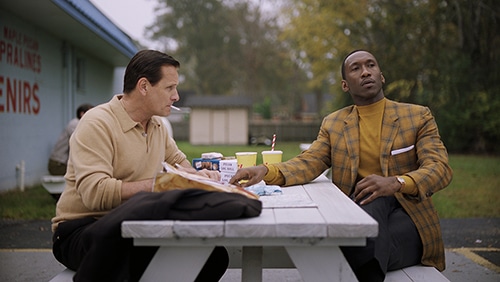 Green Book
This week we’re talking about the most recent Peter Farrelly road trip movie. No, not Dumb and Dumber. Not Kingpin. Sorry, not Me, Myself & Irene. We’re talking Green Book with Mahershala Ali and Viggo Mortensen. And we’re so lucky to have on the program, writer and performer Holly Walker (The Nightly Show with Larry Wilmore, Spider-Man: Into the Spider-Verse). If you want to hear many, many Viggo Mortensen-as-Tony Lip impressions, then this is the episode for you. The crew also answers a question from the Who Shotline: “What movie character had the biggest impact on you as a person?” Plus, Alonso has another heart attack minute, AKA The El Mero Mero De Navidad Christmas Minute. And as always, staff picks.

In news, When We Were Kings gets the musical treatment, The Wizard of Oz is the most influential movie of all time, Paul Schrader thinks there’s “no crimes in art.”